For years I've been a regular customer at four Pets At Home stores. My two most local branches are the East Grinstead and Crawley stores, and here I underwent a secret trip to the Crawley branch to review their standards and see first hand whether they live up to basic welfare guidelines.

When I first walked in I went upstairs to the neatly kept cat food section and vet area. There was nobody on reception so I presumed they were shut, though I thought it was strange as it was midday, during half term. I read a sign that had a price list for cats, dogs and rabbits. I couldn't help but wonder why there were no prices for other animals. 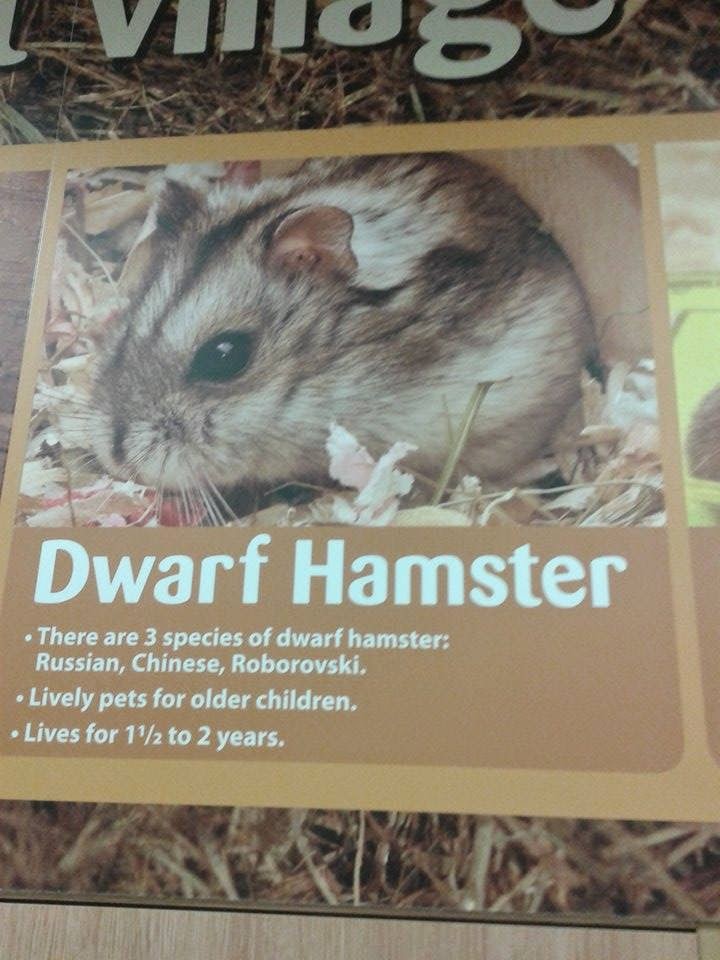 The above sign bothered me, as not only are Chinese hamsters not considered a dwarf hamster, but the three species of dwarf hamster are Winter White, Campbells and Roborovski. Pets At Home sell a hamster called a Russian hamster, which is a hybrid. It's sold as though it's some kind of special rare species. 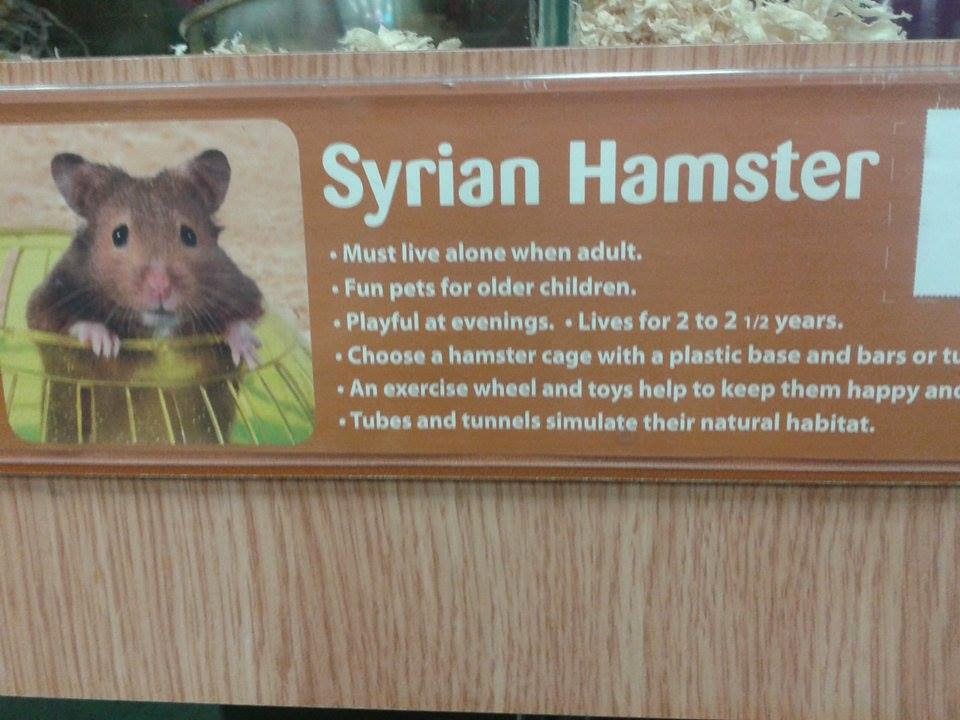 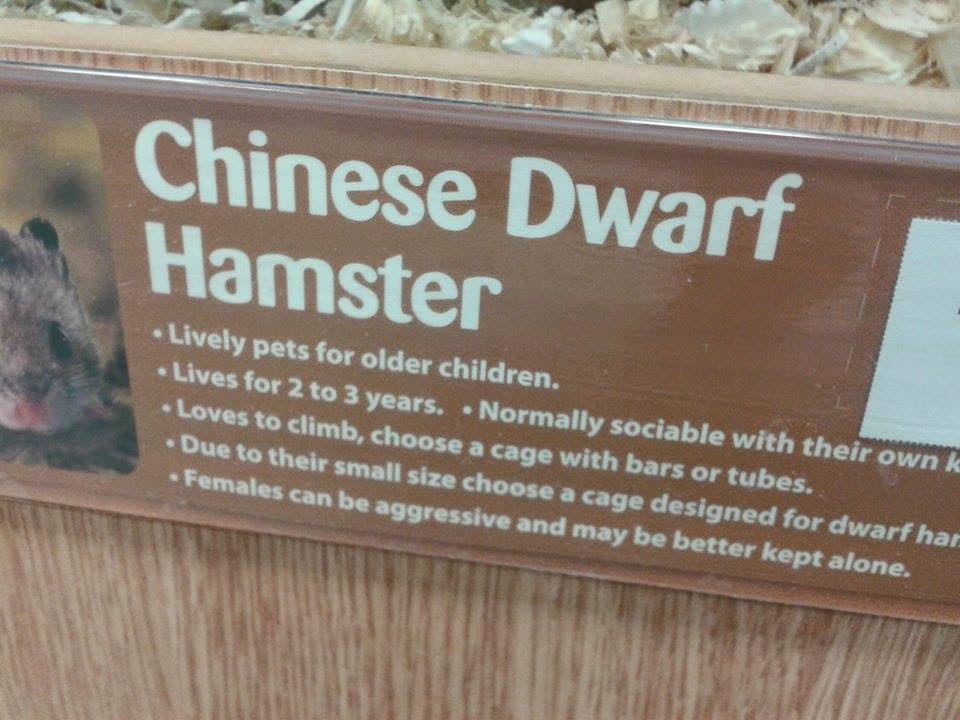 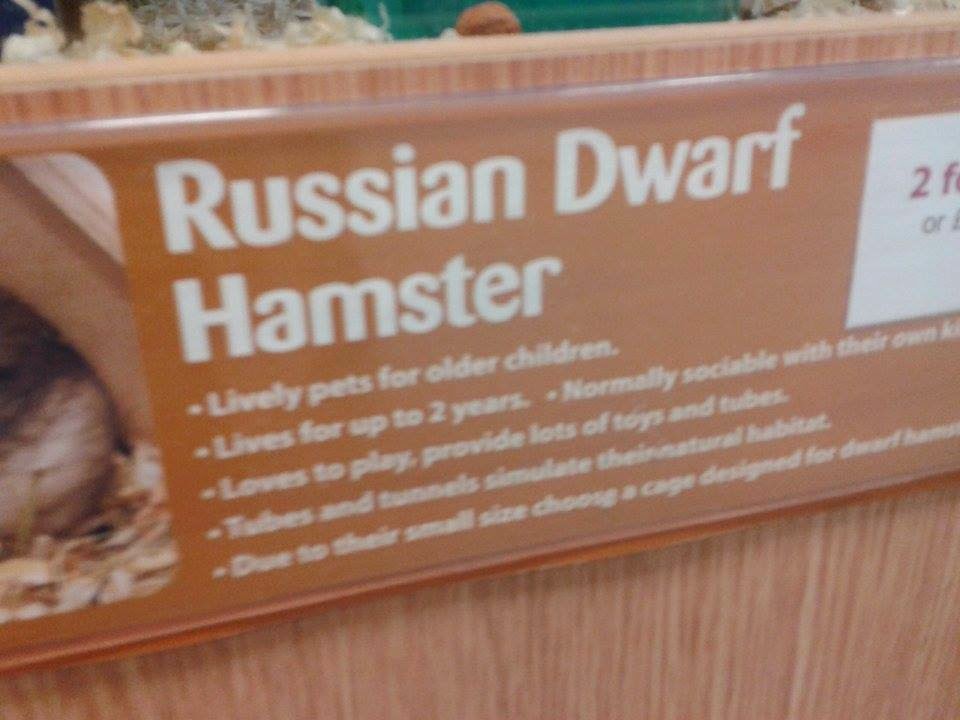 Another thing I found bothersome is that under each of the hamster signs they state 'for older children'. Making all the mothers with nagging kids give in to the "Awww, can I have one? It's cute" before doing proper research. The Syrian hamster is also listed as "Fun for older children" as though it's expected to do a song and dance to entertain us.

A woman with a young girl was looking at the Chinese hamsters with a member of staff. She told the staff member that her daughters Chinese hamster keeps screeching at her and she wants to buy them a 'friend'. The store colleague should have at this point told her that Chinese hamsters are generally considered solitary animals like the Syrian, and should be housed alone. Their sign simply states that the females can be aggressive. The colleague was telling the customer that males fight and females should live in pairs, not only going against her own employers policy, but completely wrong anyway. The customer was the one who said "I might need to get another cage if they start to fight" so I breathed a sigh of relief.

My relief turned to horror when the colleague picked up the Chinese hamster by her tail! I was horrified and my partner had to walk away out of disgust. I stood shell shocked as my anxiety kicked in. She put the hamster (Who hadn't nipped, the staff member just seemed to not want to touch them) in the wheel on its side and tried to look through the bottom to determine the hamsters gender. After a good few minutes she said "I think it's a boy". Another few minutes of looking and she said "No I think it's a girl". Lets just let them find out for certain when the customers female gets pregnant, or they end up killing each other, eh?

None of the cages in Pets At Home are actually suitable for a Syrian hamster. The largest cage they had in store was the Bristol, which was tucked out the way on the floor by a staff door. This was the largest cage and at 58cm x 35cm, it still doesn't meet the 75cm x 40cm minimum for proper hamster welfare. Their cage shelves were mainly empty and I couldn't see any Hamster Heaven cages or a space for them on the shelf. After doing further research, I have seen that it is only available online. This was previously the only hamster cage that was suitable for a Syrian, yet they have removed it from stores. Bizarre. 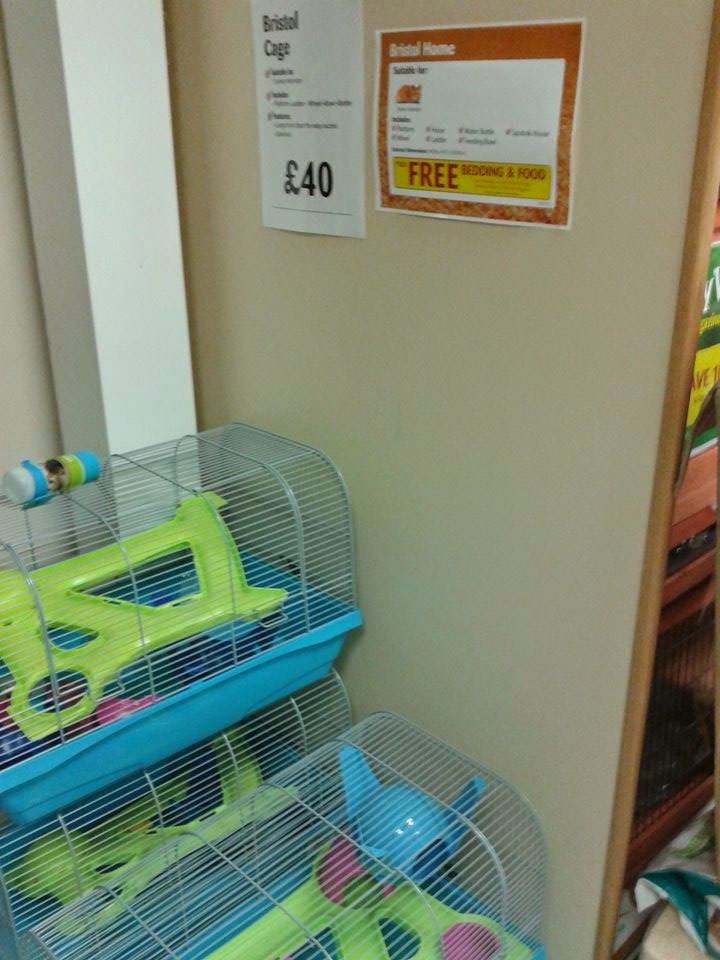 There were live locusts jumping around the shop and when my partner informed a member of staff, they simply told him that it happens a lot and they don't pick them up until they close at the end of the day. 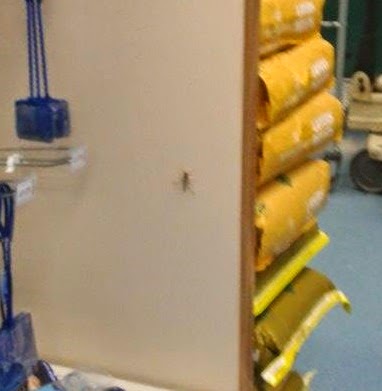 The staff all seemed flustered and after the woman bought the Chinese hamster there were no staff members working the shop floor, just two on the tills. The shop seemed chaotic, as though multiple colleagues had called in sick that day. Boxes and products were scattered everywhere and a roll pallet completely blocked one of the aisles. 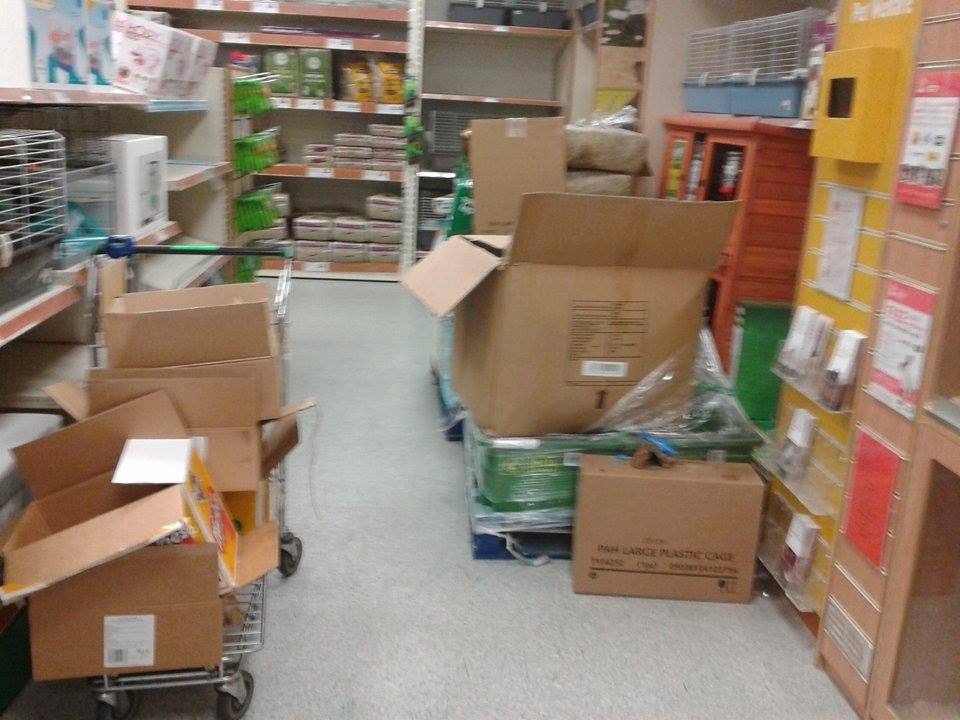 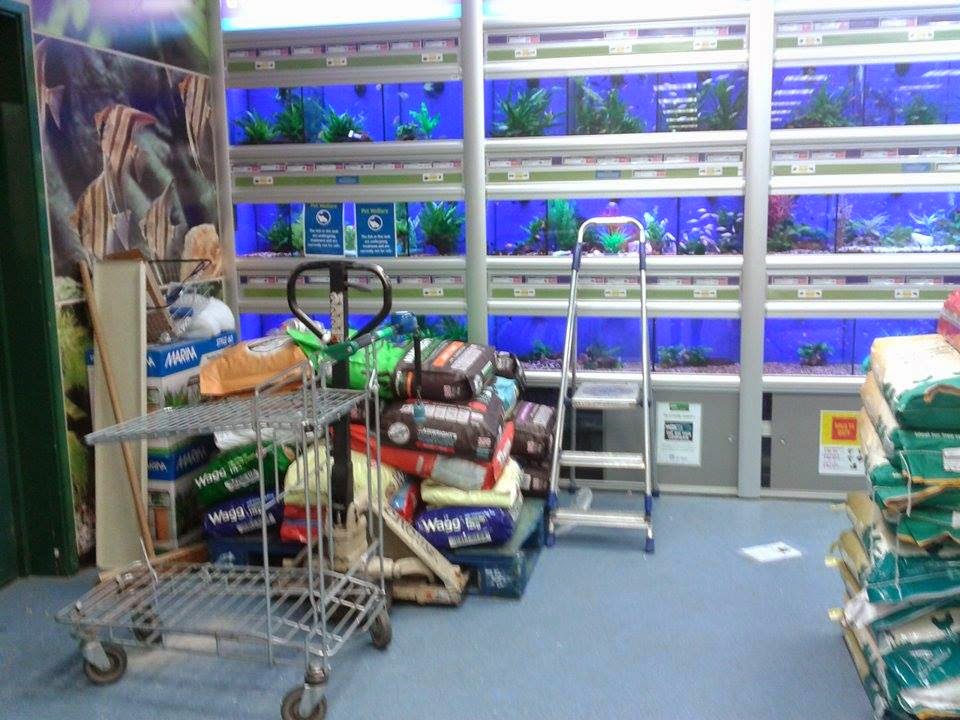 The leaflet rack was almost empty and there were no information on any species of hamster. The staff member didn't seem to ask the customer any questions regarding the care of her Chinese hamster, whether she had the correct nesting material or what cage she had. It seems the colleagues really are trained to push for sales, not ensure the animal is going to have a suitable home. 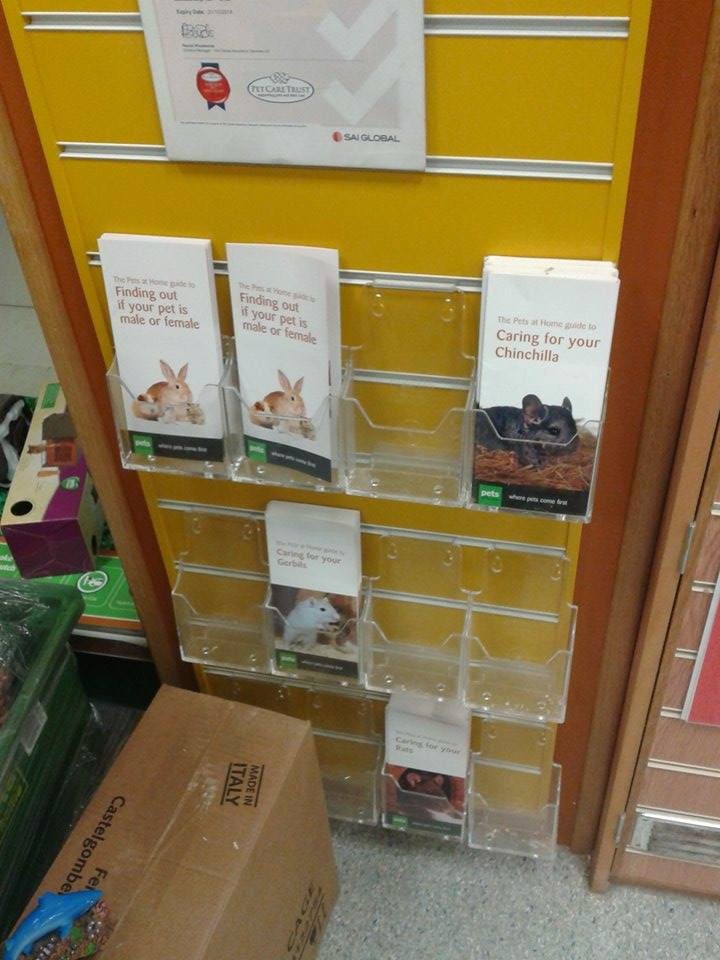 After a long successful campaign to remove the Rotastak fluffy bedding from stores nationally, highlighting the dangers and eventually receiving cooperation from the company, I was very disappointed to see they had replaced it with three other brands of fluffy bedding. These three took up the whole of the top shelf, with paper bedding tucked underneath. There was another shelf for paper bedding to the right of these three, but the shelf was empty.

The far right it deceiving as it says 'Paper wool'. It is torn into strips and looks a bit like paper, but it is in fact made from pant fibres, and is the same material as the rotastak fluff. I think it is ridiculous that they have got rid of a harmful product only to essentially order in the same thing with different packaging. 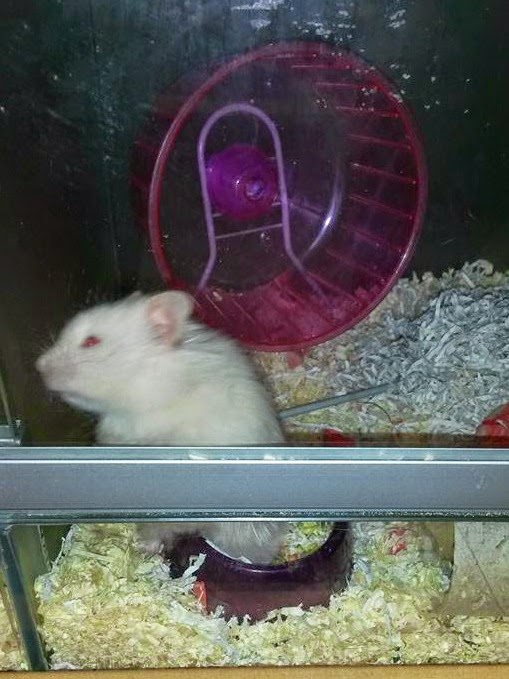 The female Syrian hamster was kept in a tiny tank with a 6" wheel. The wheel is far too small, even at this age. There is also no information on this, or guidelines that hamsters need a big enough wheel to prevent their backs arching. I have seen signs in other pet shops that state they need a big enough wheel to prevent spinal problems, they should think about this too, and not sell ones that are unsuitable for even Roborovskis. They do stock two larger wheels that are suitable for Syrians, but they are advertised as rat wheels so it is too easy for the customers to purchase a small one that could potentially cause harm. 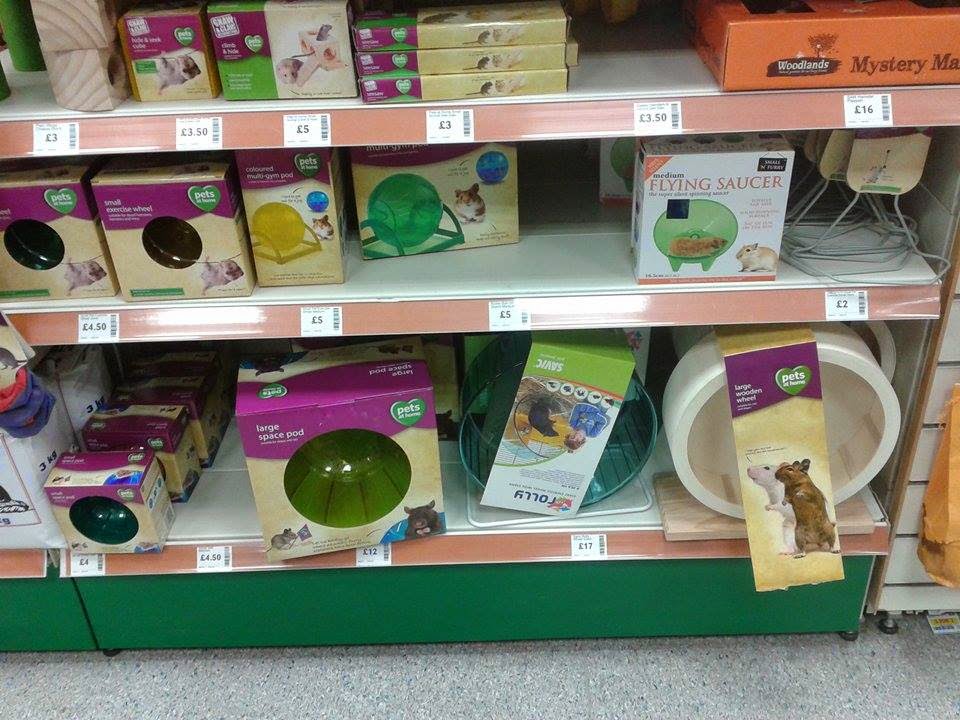 Overall I left with a sour taste in my mouth. Not only had I not enjoyed the shopping experience, but I was disappointed to see the standard of cage generally seems to be overlooked by people like the RSPCA. Money really does make the world go round for some.

A Pirate I Was Meant To Be

A strange creature floating through the abyss of life.