Today I took a trip into town to visit the East Grinstead Pets at Home. To read about my previous visit and review of the Crawley branch (In which I state some problems with P@H nationally) please click here.


When I arrived I was greeted by an immaculately kept store, there was no litter or stock strewn across the floor. Most of the products were well stocked up.

I had a look at the leaflet rack and it was almost full, apart from Syrian hamsters. I approached a nearby colleague and asked whether there were any more out the back. She giggled and went to get some. She came back with a pile and stocked it back up, handing me one too.

Pets At Home are well stocked up on wood shavings and I couldn't see any Carefresh anywhere or another suitable alternative for those with allergies. They also sell scented wood shavings which can be irritable for the hamster. Upon closer inspection, some of what I thought were shavings were actually sawdust. On the back it states suitable for hamsters, but in their own leaflet on Syrian hamster care, it states "Do not use sawdust as it can make hamsters ill". Hamsters cannot use sawdust as it is too fine and can be inhaled, so yet again they are going against their own advice, and policy where 'pets come first'. 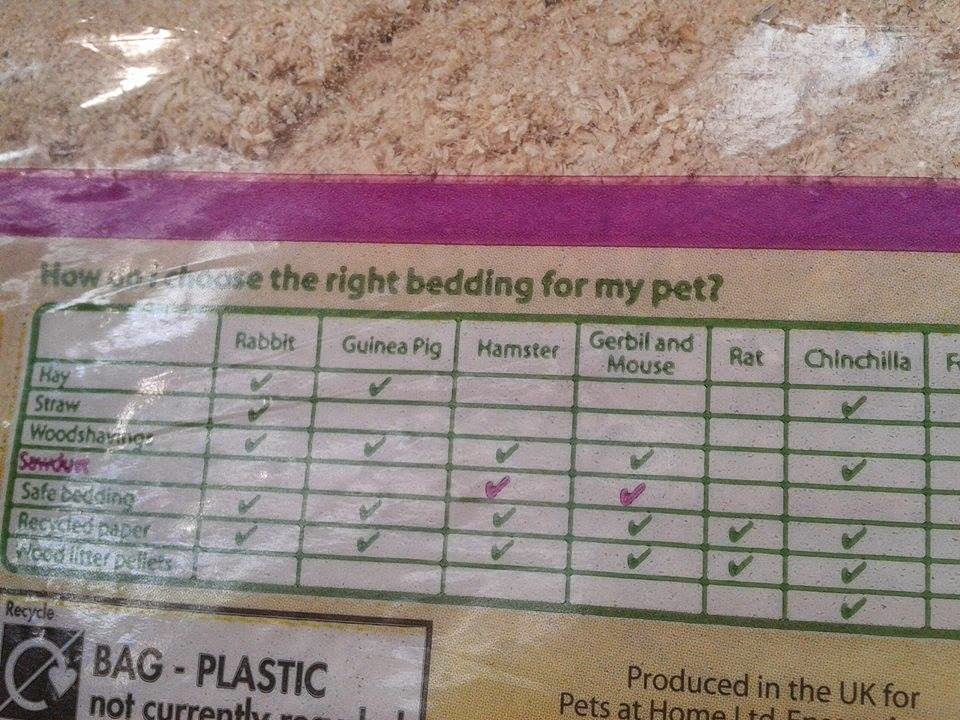 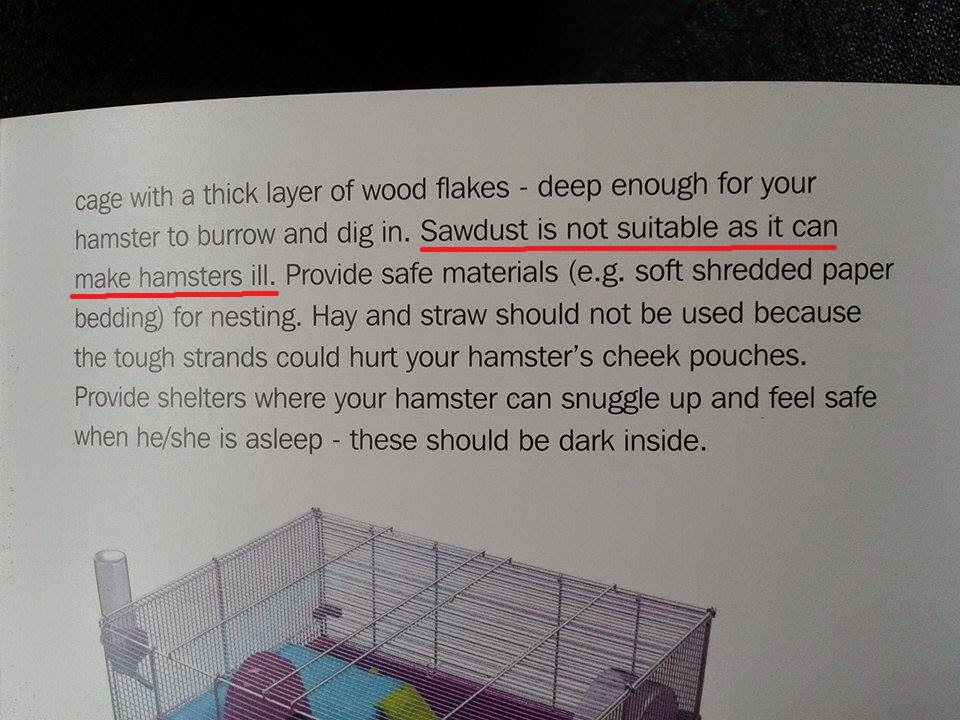 The sign below does not make sense, as hamsters have been domesticated for generations. The hamsters they sell are not wild hamsters. They like places to hide from potential predators, not because they burrow in the wild. 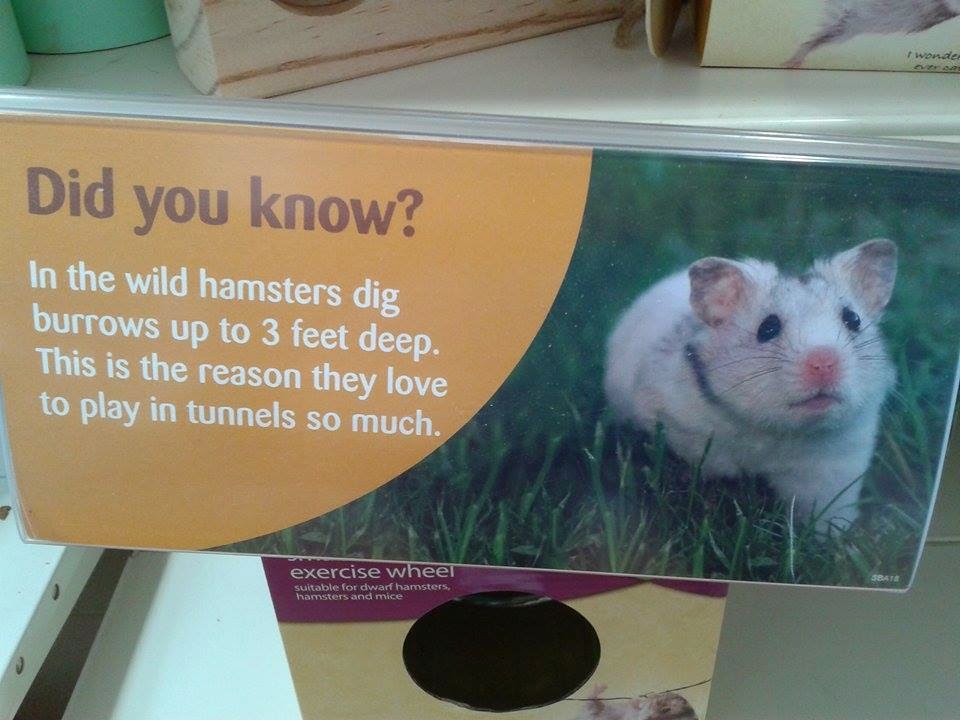 I walked past a woman who had about 6 young syrians in a small cage with a 6 inch wheel with very little wood shavings. I had then realised that she actually could have been a breeder for the store. I hovered and when she saw I was looking I went in closer hoping for a conversation. I said "Sorry to be nosy, they are so gorgeous!" She just looked impatient and didn't respond, like she wanted rid of them and to go home quickly. This concerned me. The colleague then came back to her and like a lot of the staff members I had seen, refused to pick them up properly. She first tried the 'grab from behind' approach (Which is not advised before the hamster is tame, as this is how they are picked up by predators.) and couldn't get hold of it. She then got a log bridge from one of the shelves and let the hamster climb on, and when I came back to the hamster displays later I saw they had already been put out to sell.

I asked a different colleague a small tester question, "Do you have chinchilla sand for hamsters?" he responded "You mean chinchilla dust?", "No, chinchilla sand for hamsters", which seemed to confuse him. He then took me to the hamster litter and started looking for the sand. They didn't have any stocked in and I couldn't find a space for them on the shelf. He said "We usually get a delivery in on Mondays". While he didn't understand what I was after, I was pleased that he didn't hand me the dust and claim it is safe for hamsters, however i would have been more impressed had he informed me that the dust is harmful.

Like the Crawley store, they didn't stock a single cage suitable for Syrian hamsters. There was also a mix up with the measurement labels, as one cage said 38cm in length, but one that was much smaller was labelled as 40cm. Their cages for rabbits were actually the base size of my hamster cage. The image below shows the measurements of their largest hamster cage. 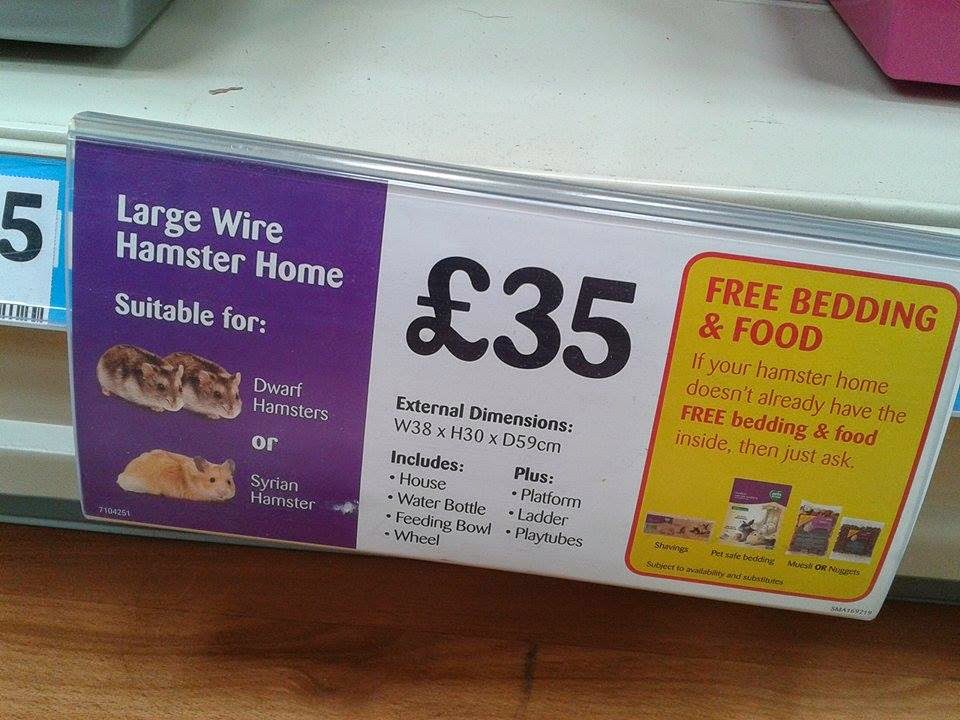 For the same price as the very poor cage in the image below, you could get an Alaska or Barney online, which meets the 75cm x 40cm general minimum guideline. This was one of their larger hamster cages in store... 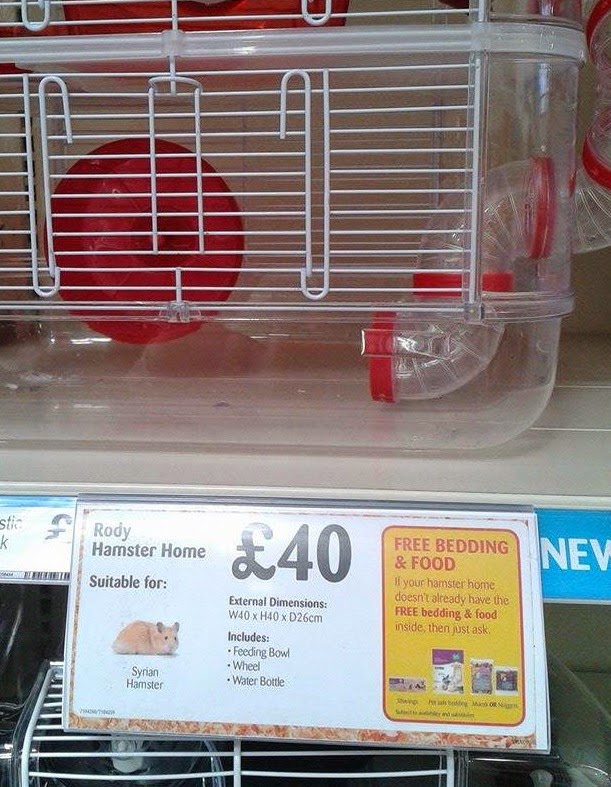 The worst part of my visit came towards the end. This was the big one. I approached a third employee and said to him "I wonder if you could give me some advice please, I was wondering what the best bedding is for hamsters". He took me over to the nesting material and it was obvious straight away that he was bluffing his way through this sale. He pointed to the paper flakes and said "They are good", then pointed to Safebed paper wool (Which is plant fibres, not paper) and said "That one is good too". I said "What about this cotton bedding, is that one any good?" and he said "Yeah it's good like the others. They can take how much they need. Just if they go toilet on it it can be hard to clean out." I bit my tongue so I didn't start explaining the hazards and my disappointment that their training doesn't involve this, and thanked him for his help. After he'd gone, I decided to get the only one he hadn't advised which was actually the most suitable for a hamster.

In the adoption center, they had a folder with images and details of the rescue animals. I turned to a roborovski and read that they had to have their leg amputated. I was then horrified to see fluffy bedding in the image with the hamster.

There was a woman that came in with her daughter who wanted a guinea pig. She was out the store within 5 minutes with the animal. I hovered nearby when the child was holding the piggie to see whether the colleague would properly test the customer to ensure it's going to the right home, she said "Do you have a cage and stuff?" She said "Yeah, yeah." with no further queries after that.

The **disturbing** images below were shown to me by someone who visited the Newton Abbot store. Not only is there no stimulation or enrichment whatsoever, there are smears of what looks like blood on the side. 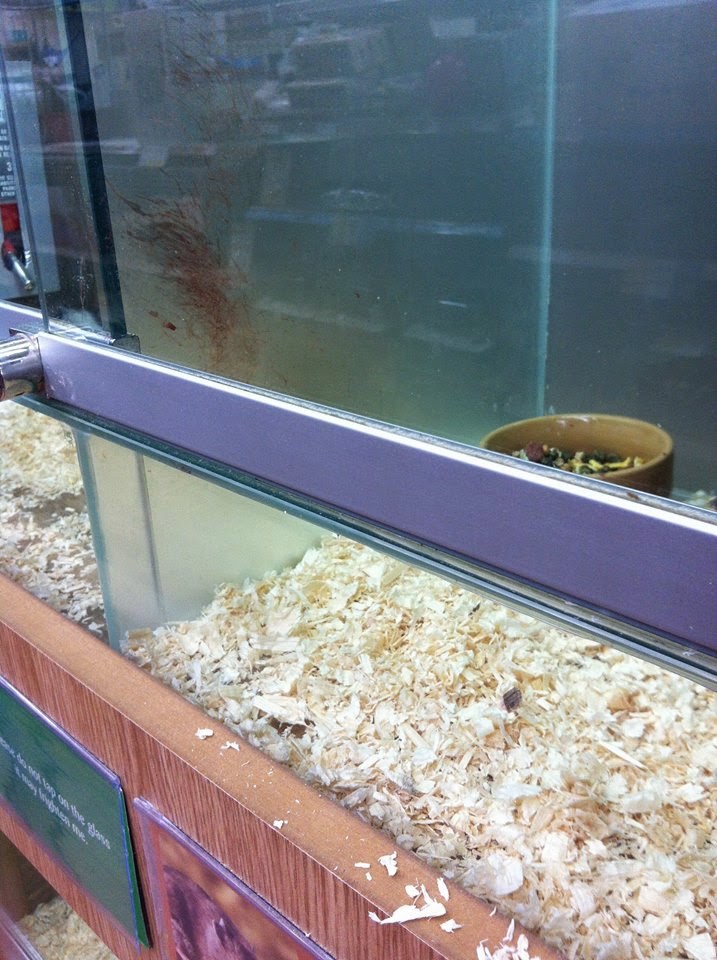 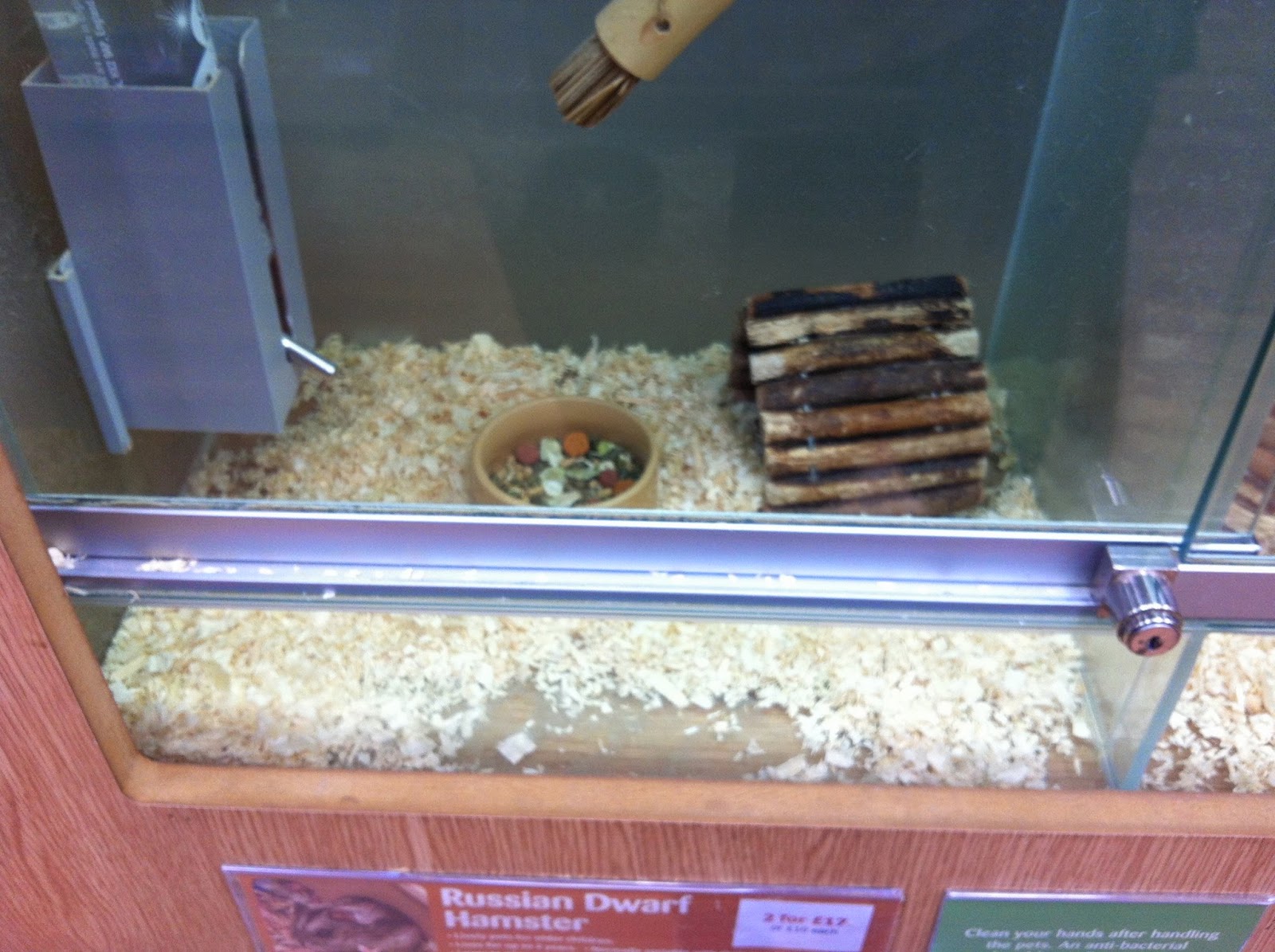 I find it exceedingly disappointing that despite genuine concerns towards this company, they show no desire to improve or pay attention to modern research. They continue to sell products that are considered harmful, or that appeal to children instead of practical for the welfare and life of the animal itself.

A Pirate I Was Meant To Be

A strange creature floating through the abyss of life.